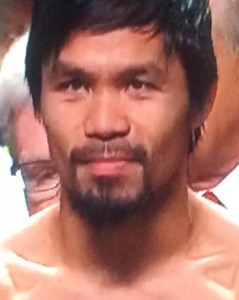 When we get past the undercard and all the pre-fight festivities,  I will type my impressions and score the fight in real time here.

Strange to hear Pacquiao described as the “challenger.” But he is.  Bradley is 31-0 and the WBO Welterweight champ.  Pac looks all business. No smiles. Bradley has his game face. The rumble begins.

Round 1: Pacquiao and B trade shots, P commands center of ring early. Both fighters keeping their distance while trying to show aggression. Bradley toward the end comes on with :12. Round goes to Bradley, 10-9.

Round 2:  Bradley pushed back on hook, recovers. Pacquiao aggressive, throws combination and B goes into ropes. B comes back with body punches, doesn’t give in. B. with hardshots to P head. B not backing down.  Close, but I’ll give that to P for getting B on ropes, 10-9.

Round 3: Pacquiao lands combo early. At 1:57, P lands solid lefts to B. B has P against ropes and lands to the body. P landing left to B.  B counters with rights to the body. Flurry of punches in this round, give it to P, 10-9. Compubox numbers on HBO give P the edge with 22 powershots, 7 more punches landed.

Round 4: Bradley gets in a shot that rocks Pacquiao. B needed that  as P was landing shots early. :30 left B shows he’s unrelenting. The B. right gives him edge here. Bradley, 10-9. Replay shows P lifted off his feet.  Punch stats still show P. landing more.

Round 5: Minute left, the round still contested with both fighters trading jabs. B had arms down in last :15 and Pacquiao may have stolen the round with action in the last seconds. Pacquiao, 10-9.

Round 7: Pacquiao gets a left in. Bradley lands a hard right, and some body shots. Tempo back to that of early rounds. Combos by P with :44 left. P adds more with B in corner. Big round for P. as B tries modified “rope-a-dope.” But P. tees off. Pacquiao wins that, 10-9.

Round 8: Pacquiao cruising, but lands with his left several times. B. tries to mug, to show he’s not hurt. Not sure if that’s working. B. coming up top with the right. Close, but ring generalship gives round to P, 10-9.

Round 9:Compubox numbers have P ahead with 119 punches landed to 90-plus for B thus far….  P. rocks Bradley into ropes and seems hurt. Off-balance twice so far. P. with rights and combos to B.  B. is throwing 1 to P. 5 punches, it seems. Pacquiao wins the round 10-9, decisively.

Round 10: Pacquiao in last round had 14/24 to B 10/24 punch edge. This round starting with P. in command at the center and B. backing up.  B looks to be trying to find a knockout punch, but missing. P counters with combinations that have him outpointing B.  P with left seems to stun B and B counters wildly and misses. Pacquiao wins round, 10-9.

Round 11: Pacquiao outpunched Bradley 26-12 in previous round. P starts out round with solid left. B seems to be tiring as he’s not throwing as many punches. Pacquiao the aggressor, Bradley backing up. P lands a left with :40 left.  Round ends with B retreating and missing. Pacquiao wins round, 10-9.

Round 12: Compubox numbers continue trend. Pacquiao landing. Bradley’s head turned. Bradley never has had a KO past the 8th round, so unlikely here. P good defense catching B’s best. 1 minute left, B misses right. P at center in control :30 left. Time out due to accidental head but with :12 left.  B starts working but it ends. B lifts arms up, but why? I’ve got P winning this 10-9.   And have P winning 11 of 12 rounds. (Correction: On recount, I gave the 4th round to Bradley based on the “lift-up” punch he landed on Pacquiao. Wasn’t a knockdown, but was impressive.  So Bradley won 2 rounds, Pacquiao 10, in my estimation).

Bradley was tough early. But didn’t do enough by my eye.

HBO’s numbers show P landed 198 to Bradley’s 141, and landed 35percent of his punches to Bradley’s 22percent.

The placement of the punches: Pacquiao landed 176 of his punches to Bradley’s head.  Bradley landed 98 t0 Pacquiao’s head.

In the end, Bradley good, but Pacquiao is just better.  Bradley is a toe-to-toe guy, not a knockout guy. Pacquiao may not have the kind of power he showed when he clicked off  Ricky Hatton, but he’s got a lot left.

This is a $20 million guaranteed pay day. And a relatively soft spot for Pacquiao.  He said he wants to go 2 more years. It may take that long before Mayweather stops ducking him.

That’s it for this live blog experiment. Check back for more analysis later.

SEE MY COLUMN in the  Philippine Inquirer:

You don’t really have to know boxing to understand that Timothy Bradley, Jr. did not win that fight against WBO welterweight champ Manny Pacquiao.

If you were one of the millions who plunked down their hard-earned cash to watch a “fight,” you could see it with your own eyes. Bradley was handed the championship belt, as if it were a pre-scripted fantasy. Or maybe the New Wrestling.

Before the decision was handed, it was a decent enough show. Pacquiao, the more experienced champ landed more punches and completely outclassed the younger Bradley, who tried to keep up with Pacquiao, but rarely got to him. Bradley did get in some body punches, especially while holding Pacquiao, but there was nothing from Bradley that appeared to stagger or even pose a threat to Pacquiao.  Indeed, throughout the fight, Bradley’s trainer, by his use of the “F” word, seemed frustrated by his fighter’s inability to take the fight to Pacquiao.  Bradley threw a lot of punches, but he also missed a lot. Meanwhile, Pacquiao was able to land his straight left against Bradley that staggered him again and again.

In my most charitable assessment, I didn’t see Bradley win one round. Bradley did nothing to Pacquiao that was close to the pounding Pacquiao put on Bradley in the fourth and fifth rounds.

But the judges saw it differently and gave the fight to Bradley.

Maybe this was boxing’s “affirmative action.”

Athletic judging is after all, subjective. We  know this from watching Olympic skating judges from France.

There’s always the plausibility of an implausible result. Injustice happens.

Still, there are enough real injustices in the world to care about instead of this one, where Pacquiao reportedly got over $20 million for this fight to Bradley’s $5. (Nevermind what the judges might or might not get. All I can think of is the odds must have been so good on Bradley, and all the money bet on Pacquiao, that certain gambling interests just couldn’t resist a massive score.)

In a previous column on the fight, I had suggested that this be Manny Pacquiao’s last fight. Considering what boxing does to your brain, and with all the other interests Pacquiao has in politics, religion, and show business, leaving the ring now just sounded like a good exit strategy—before anyone gets hurt.

For Pacquiao’s sake, I wanted this fight to be his last. I just didn’t think it would be my last fight.

They’re already talking about Pacquiao Bradley II, to correct the injustice, and to, of course, enrich a few boxing promoters. (Ever wonder how Bob Arum has a piece of both fighters?  It makes his claim of being ashamed for the sport ring very, very  hollow.)

Sorry, boxing.  As Roberto Duran would say,  “No mas.”

I’ll be back when the game gets a massive infusion of integrity.