The ring’s the thing.

The Giants definitely know it.

In the sports biz, the quest for the ring keeps aging jocks in ointment.

But what about the sports fan? Does the Giants opening day celebration weekend– three days of hoopla and some OK baseball—really have to feel like Wagner’s Ring cycle?

(True, Wagner had four operas, but the Giants seemed to skip over “Siegfied” and end with Sunday’s game that felt a bit like “Twilight of the Gods”).

In some ways, it’s almost too bad they have to play a game.

It’s so much more fun to see Tim Lincecum get his ring and greet the Giants  legends ( today it was Mays, McCovey, Marichal, Cepeda, and Gaylord Perry). It’s certainly easier on the emotions.

It’s all ups, no downs. Unless you’re looking at your ring.

So early in the season, compared to a “celebration” an actual game is somewhat anti-climactic.

Or at least, sets up a game for the drama we saw on Sunday, where we start high, rise to a peak, then  finish tragically.

The celebration was a total Giants extravaganza  with the  Tiffany rings brought into AT&T Park  via cable car, and then hand delivered by the city’s finest grip men to the Giants.

There were symbols galore in such a dramatic entrance.

Rings were given out.

And the streamers flew.

Oh yeah, and then there was that game.

All I can say this morning is,  it’s a good thing Maggie Thatcher died.

The Iron Lady wasn’t Lou Gehrig, but the passing of a world leader puts things in perspective and flushes the news cycle of the trivial.  (Though if you are still mourning the 49ers Super Bowl loss, you can’t be helped.)

The Giants lost the game 14-3, and if you’re wondering when did David Akers join the Giants and doesn’t he usually miss his field goals, once again, you can’t be helped.

No, we’re talking baseball and Matt Cain here, and as perfect as Cain was for one special night in 2012, he was just as abysmally imperfect for Sunday’s garish loss.

For the first three innings, Cain seemed like Cain, retiring the Cardinals in order, with two  strikeouts.

Cain really was perfect. But then came that 4th that was beyond imperfect:  nine runs and no explanation.

The Cardinals hit six singles, two walks and a ground-rule double to go up 7-2, and Cain was out of the game.

Cain talked later about how the game can be humbling. Perhaps, the Giants needed that on the weekend they celebrated the highs of last year.

To see the pitching—felt to be the Giant’s strength—be so ineffective is definitely humbling (one pitching bright spot has been the relief work of Chad Gaudin).  Giants’ bats have already been humbled. The Giants continued to be hapless with runners in scoring position, 2-21 coming into the game. They added to that negative stat in the first inning that initially seemed so joyous at the start. Angel Pagan, the hottest of all Giants coming into the game 6-20, hit a sinking line drive into the left-center alley that enabled him to dive into third.  But he died there like a bridesmaid.   Scuataro, coming into the game 2-19, took a called third strike. Then Sandoval, hot with two HRs and 4 RBI in five games, struck out swinging. And then MVP Posey added to the futility with a meek groundout.

Some sliver linings: First hits for rookie Nick Noonan, and third-string catcher Gullermo Quiroz.  Quiroz’s hit came in the 9th, a pinch-hit single that gave the Giant’s one last gasp of offense.

Oh, well, the team has their rings, and a full season yet to go.

Let the people talk about whether the weekend was a bit too much.

What we’ve seen the last few years is how a winning Giants team has truly become tantamount to a public institution.

A lot of it I trust is due to Giants CEO Larry Baer growing up a Giants fan and a native San Franciscan. I knew Larry growing up. We both attended Lowell High, and were on the debate team together. (I did play JV Baseball).  The other day when we talked, it wasn’t about the Giants, but our families. He told me where his kids were going to college, and I told him my kid was going to Cal, Larry’s alma mater.  That deserved a fist bump. The exchange revealed how all that personal stuff, the human stuff, really matters.

That makes three-day baseball celebrations, where the players and legends and the fans gather over the game, more important than we think.

Baer and the Giants more than just connect the dots between the past and the present.

They are cementing the legacy at 3rd and King. 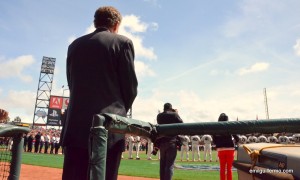