If you look at my tweets along the right panel of this blog, you know I was stunned to hear that there would be no topping $300,000, no 12th victory, no on-going Chu dynasty on “Jeopardy.”

It was sad following the roll-out of the pre-recorded game. Arthur Chu was live tweeting from 7pm EDT,  and though  I couldn’t see the show,  I could sense from the tweets something was going wrong. Very wrong.

From the start of the week, I knew something was a bit askew. Arthur just seemed off his game on Monday and Tuesday. He won handily,yes. But he got some easy answers wrong. Fortunately, he was not up against  very savvy  opponents.

But on Wednesday, he was up against two tough women, Julia and Diana, who both played aggressively and knew their stuff. Diana started strong with literary questions on Willa Cather and David Copperfield and when Arthur answered one with “Two Penny Opera,” I knew he would be at least a penny short today.

The pattern only continued.

When Arthur couldn’t get a Native American question, and Diana got “Hopi,” that’s when I sensed hope was lost on this night.

There also seemed to be a few  glitches worthy of competitions like Olympic figure skating. In Double Jeopardy, even as she was getting all the Daily Doubles, Diana seemed to answer a question twice, changing from “Peptic” to “Peptide.”

It would only make Arthur fans dyspeptic. Foul? It would get fouler.

There were at least two more  irregularities, like on the Monty Python question, whereby Arthur got a CREDIT before Final Jeopardy. And according  to Arthur’s wife, there was much discussion off camera that all came out in the edit.

But even with all that,  Diana was  still way ahead. Even with a double, Diana would have had to fail and bet illogically.

And so with British Royalty, and the wrong question, “Who is George II,” King Arthur zeroed out.

The negative sentiment about how he played the game, seemed to have died. And many of his detractors admitted to liking him now that he was a loveable loser.

It was just exciting to see a regular Asian American guy get on a show for 3 weeks or so and get exposed to an average audience of 10 million people a week.

He should run for something.

In the era of social media, Arthur is the image of the Asian American male. For the moment.

After a week off, Arthur Chu’s “Jeopardy” run continued this week.

I’d like to think the racism toward him has died down, but I’m sure there’s still some resentment out there.

But it’s likely less about Chu’s race or his aggressive style of play, and more due to outright jealousy.

The guy has pulled in more than a quarter mill and makes “Jeopardy” more interesting than it deserves to be.

What surprised me this week, however, is that Arthur is not nearly as formidable as one might think.

In the first round Monday , he was aggressive right away, starting with “Potent Potables” for $1000. But then he missed the clue “Black Bush” and couldn’t come up with “What is Bushmills?”

Maybe he’ll have a shot on St.Patrick’s Day. Or maybe he just likes Cleveland craft beer?

Then there was the Faulkner answer in a literary category, “1929 title…”

And he came up with “What is Franny and Zooey”?  How do you mix up J.D. Salinger and William Faulkner?

Arthur has some weak spots. But never mind. The technique of playing the high ticket answers first does two things. If you answer them right, you build a big lead while your opponents become even more nervous than normal. If you don’t answer and no one else does, you take the biggest threats off the board.

He’s not cheating. He’s just adding a level of strategy that makes the game more interesting.

You still have to get the answers right. And when he does, Arthur builds almost an insurmountable lead as he did on Monday. By the start of Double Jeopardy, Arthur was at $6,000 to his opponents $200 and minus $200.

The game was virtually over.

The only way to lose was by betting wrong. (You double your closest opponent, assuming he’s smart enough to double up in FJ, and come up with $15,600).

That means Arthur only needed to bet anything up to $2,600 to finish ahead of his closest opponent.

Even if Arthur didn’t know the answer, he’d still win.

And that’s what happened. He didn’t know the correct question to the Broadway composer answer, picking Alan Menken and not Stephen Sondheim (showing his obvious generational weakness).

I haven’t watched “Jeopardy” in ages. But now that Arthur’s made me watch it,  I appreciate it a lot more.

I still don’t get the racism people have displayed toward him. Arthur actually makes the game less boring. In fact, Arthur’s style could be a losing strategy if you don’t get the answers right. That’s the real risk. The key is not to  guess.  If you’re wrong and put yourself in a hole, you can’t easily get back in the black without a big run among the easier answers.

But if you do know the answers, and land a Daily Double, you can sprint ahead of your opponents  and go wire-to-wire.

Still, you have to get the answers right.

I hope Arthur wins. I like to see an Asian American with bangs go on “Jeopardy” and talk about things like how he’s  promised his mother he will take care of her the rest of her life. That’s good old Asian American family values for you.

So much for the “Jeopardy” villain. There’s not a ruthless bone in this kid’s body.

But he’s shown some vulnerability on some of these “generational” questions.

He has a good chance to continue his “Jeopardy” buzz saw. He just  needs to avoid his weak topics and smarter, older players.

UPDATE: 11:43 p.m. PDT — Just saw the replay  of Tuesday’s show and was surprised that the Chu-train stumbled a bit early. On the very first question he aggressively went with the “Reddit-Ask Me Anything”  category for $1,000 and then couldn’t convert the Mookie clue into “Who is Spike Lee?”  Into the first break, the champ was trailing with $1,200 to his opponents’ $2,600 and $1,800. He didn’t know much about walrus teeth either and sunk to a low of  $200 vs. his opponents at $3,000 and $1,600. But his strategy begets volatility, and sure enough in no time he got a question right on Pringles, Dublin, and the Black Forest to get him back to $2,000. A Daily Double on Best Sellers got him the clue “1972 Diet Revolution…” Who is Dr. Atkins, of course. That got him to $4,000 and the champ was back on track. Double Jeopardy saw two incidents worth comment. One a mispronounce of actress Frances McDormand. Arthur said “McDiarmand.” It was Arthur’s “travoltifying” moment (See “Adele Dazeem.”) But it didn’t hurt him. Arthur was already at $14,400, more than double his closest rival. Another speed bump occurred on the question “In 1814, this VP from Mass. for whom a political term is named died in office having served less than 2 years.”  “Who is Gerry,”  said Arthur, with a soft G, because of the term “gerrymandering.” But host and arbiter Alex T. said it was Elbridge Gerry with a hard G. (BTW, Old Elb was Harvard, ’62…as in 1762). Once again, it didn’t hurt Arthur who was so far ahead, the game was over. Into Final J., the game recycled a subject from the previous day, with a clue on a 1951 novel about a hero who rescues children falling from a cliff. Good thing Arthur, who confused Faulkner and Salinger on a previous show, got it right this time. Catcher in the Rye. Arthur bet just enough to hit $20,000 giving him an 11 day total of $297,200. Once again his style helps him to overcome some wrong answers early in topics where he’s shaky. But the champ is showing some weakness. In some ways, these lesser conventional contestants play right into Arthur’s game plan. Playing the big numbers first helps him. And it’s kind of fun to see his score bounce all around the board. But If he ever catches another smart, aggressive player in a volatile matchup, now that would be a thrilling show. 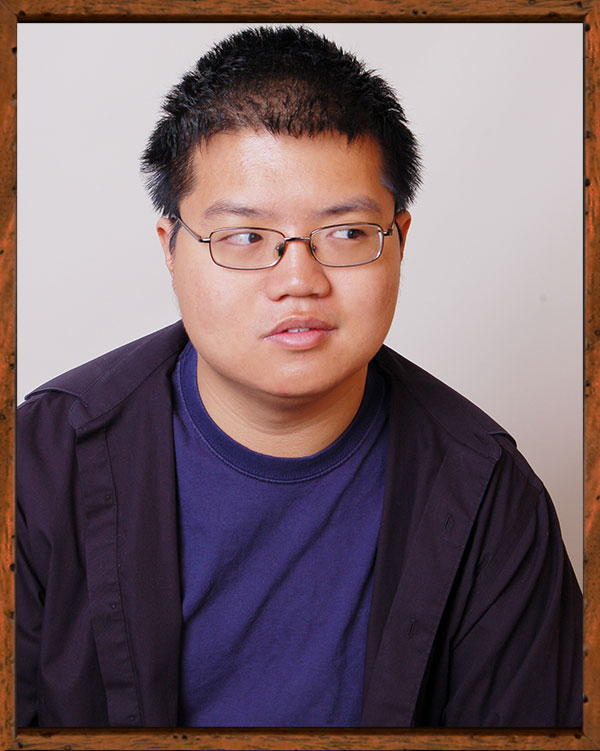 This is Part 2 of my conversation with Arthur Chu, the Asian American who has amassed more than $235,000 in two-weeks on “Jeopardy.”

But it’s also made him the target of racist and intimidating tweets and comments on the internet. He talks about what it’s like to be a racial minority, and how despite opportunities and success, there’s always a feeling of a  compromised sense of belonging. He hasn’t forgotten what his father told him as a young boy growing up Asian American.

But he also has chosen to be very open and  confront any racism he perceives head on. 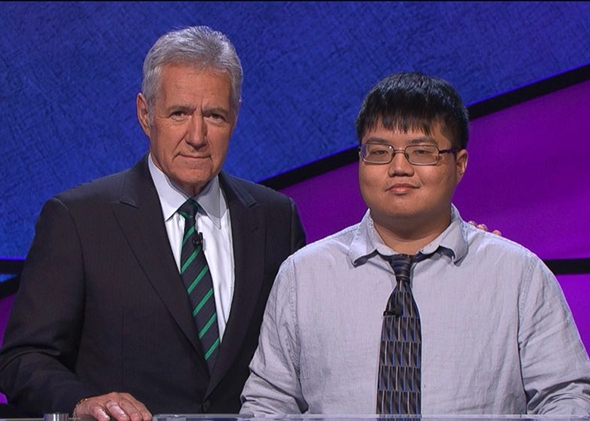