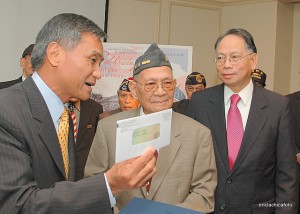 This lump sum comes with a catch.

If a vet lives longer than 2 more years, then what? More money would be helpful. But there is no more money. But in the end, it all turned into an  actuarial game. As the vets died off, the numbers declined. It finally reached a point where the U.S. could afford to give the vets next to nothing. After inflation and the devaluation of money,  the U.S. gets off cheap.

The money becomes nothing but a symbol.  Will it pay their bills? Help them to live out their lives in dignity? This is a ticket to penury.

But what a ceremony it makes. Give a check to a dying vet. Better than ignoring them all for the last 50 years or so, I suppose.

In all my discussions with people on the inside of the negotiations, it was said that this was the best outcome for now in what had become the death march of politics.

So why doesn’t it all feel better than it does?