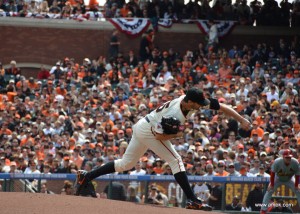 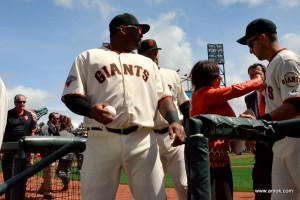 I have refrained from commenting too much on the Giants this year. I’ve watched or listened to every game, and lived and died with every one run victory.

Last night may have been the last straw for this SF native.

Maybe the difference was that it was the Dodgers and Lincecum was on the mound for us. These are always meaningful games beyond the standings. Once again, Timmy was brilliant. But for a Giants pitcher to win a game by himself, he has to be brilliant plus.

The Giants staked him a 1 run lead.

A one-run-lead should be like giving salad to meat-eaters. It’s just the appetizer, right?

For the Giants, it’s the whole meal.

It takes four runs for the Giants to be bullet-proof. Unfortunately, this season it takes them four games to score that many.

We have been talking about this lack of offense for the last 5 years at least.

“Get a slugger” has long been a refrain since the lament, “When Benjie Molina bats cleanup you’re in trouble.” But the Giants have always managed to be entertaining.  Hapless, nerf-bat swinging, not so-giant Giants.  I watched, I rooted, I cried. Losing was the norm. Close, but not close enough. Whatcha going to do? Root for the A’s?

Then 2010 came and the timely hitting and the luck played out. I went to every post-season game, to the parade, bought every T-shirt, the works.

Our reward in 2011 has been  a return to pre-2010. No laughers here. It’s baseball by the pitch. When you have a pitching team, that’s the way it is. You score one run, and your pitchers have to hold.  Makes for a tense,  frustrating game, because arms can’t score.

Love the K’s. But you can’t throw the ball over the fence and call it a home run for our side.

And when the defense fails and a cheap run for the other team scores, a pinprick turns into a dagger.

That happened last night with the Dodgers and their pinch-runner, Eugenio Velez.

Velez was part of those pre-2010 Giants teams,  the ones that made us sift and sort the Giants of the future. Would it be Bowker? Would it be pre-panda Panda?  Freddy Lewis?  Velez? Who would be Giant enough?

Velez had his shot. He did things with his bat and his speed, then he  undid most of it with his glove.  He had his time as a stick-figure lovable hero.  Amy G had him on. I was always bothered by how they pronounced his name. “Ay-you-henio? ” “You-henio” seems more like it. “Gene”?  “Gino”? The guy didn’t get to nickname status. No panda, no baby giraffe. No gazelle (for his speed).

When he was out of a job and found guys like Burriss and Ford back, it must have been tough for him. How oddly satisfying it must have been for him to put his spikes on home plate and score the run that would put the Giants eight-and-a-half games back.

That’s baseball’s poetics, folks. The tragedy has a beginning, middle and end.

The Giants were like a mythic tale last year. This year, they’re still an entertaining  page turner, but just a summer read, and now not likely at all to go deep into October.