Currently,  I am in Asia on an assignment, but not in the Philippines. Feeling so close, yet so far. So what I’m doing is considering what I can do personally, if not professionally. We all feel the human tug of compassion. Maybe more than a tug for some.

That’s why I turn to CRS.

This group works with people on the ground and is very efficient in how they do things. They also work with diverse groups of people. Not just Catholics. If you’re wondering how to give, I use this group to get money to the Philippine on an ongoing basis. An Asian American heads it up. And the organization is extremely accountable. No overpaid people here.

It’s hard to make sure money and aid will get to the Philippines without being shaved down by admin costs. If you’re looking for a charity with a great efficiency rating, Catholic Relief Services is worth looking into.

Read my opinion piece on the Philippines on CNN.com. 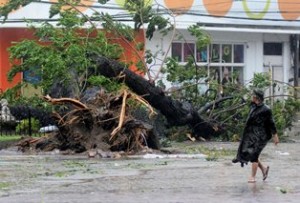 Called Yolanda in the Philippines, Haiyan internationally, by any name, the super typhoon has heaped on a sense of despair and helplessness.

Though we all knew it was coming from the warnings in both old and new media, there was still such an overwhelming sense that nothing could be done to help the country from its fate.

The very day the storm hit, a friend of mine in the San Francisco Bay Area, taken by news warnings, asked me if I still had relatives in the Philippines.

What could I tell her? Despite being born in America, in the broadest sense, as a full-blooded Filipino, I’m related to everyone there.

From a humanitarian sense, of course, we all are.

Over the weekend, as a U.S. based columnist for the Philippine Inquirer, I knew to turn to the paper’s website for coverage direct from the hardest hit area of Leyte.

For me, more than the photographs and videos, reading the first individual accounts of the super typhoon’s wrath were simply more harrowing, indicating the monstrous power of the storm. Reporter DJ Yap’s story described people in the throes of Yolanda, including one woman, Bernadette Tenegra, who tried to hold on to her daughter who was ravaged by wooden splinters from all the houses crushed by the storm.

“The Tenegra family had huddled together in their shanty at Barangay (village) 66-Paseo de Legazpi, believing it could weather the storm as it had always done in the past.

But as the water rose with astonishing speed, the house toppled over, sweeping away the occupants, including Tenegra’s husband and her other daughter. They were able to scramble to safety, but the youngest Tenegra was spun around by the current along with the deadly debris.

“I crawled over to her, and I tried to pull her up. But she was too weak. It seemed she had already given up,” the mother said.

Mute shock was etched on the faces of survivors, many of whom were unfamiliar with storms as fierce as this one.

Richard Bilisario, an Air Force man, was carried by violent waves that demolished his unit’s barracks at the military base overlooking the Leyte Gulf.

“At first, the wind was only coming from inland, so we didn’t really mind it. Then suddenly we heard the howling from the sea,” he recalled.

“When we opened the door to check, the water was already up to the knee. And as soon as the door was opened, the water just rushed in, and the 11 of us were thrown away,” he said.

Four are still missing, including their commander, Bilisario said.

At downtown Tacloban, two men silently pushed a wooden cart carrying the bloated bodies of a woman, her teenage

son and her baby on the flooded main avenue.

The men took their gruesome load through the streets, as kibitzers watched in morbid fascination.

The woman’s name was Erlinda Mingig, 48, a fish vendor. She had been trapped in her one-story home with her two children, John Mark, 12, and 1-year-old Jenelyn, at Barangay 39-Calvaryhill.

“I told them to stay in the house because it was safer,” said Mingig’s husband, Rogelio, 48.

But the water was rising dangerously fast. When Erlinda tried to open the door to escape, it would not budge,” the man said.

“We found her embracing the children in one arm and grabbing on to the ceiling with the other,” he said.

So what do we do now?

The coincidence of Veterans Day and the world’s awakening to the apocalyptic images of the super typhoon’s hardest hit area, Leyte and its capital city of Tacloban, is eerie.

This is not the first time the region has seen such death and despair—and overcome it all.

It was on October 20, 1944, that General Douglas MacArthur made good on his “I will return” pledge after being forced out of the Philippines by the Japanese in World War II.

Standing on Leyte Beach, with Filipino president Sergio Osmena and Philippine General Carlos Romulo, MacArthur and the American military took back the Philippines and launched the Battle of Leyte, the biggest naval battle of WWII.

In the Leyte campaign that liberated the Philippines, the Japanese lost nearly 50,000. In victory, the U.S. suffered nearly 16,000 casualties.

Their lives enabled Philippine General Carlos Romulo to report back to Congress: “How I wish the world could have witnessed the ceremony on the capitol steps in Tacloban when…just two days after it was freed from enemy control, General MacArthur delievered Tacloban into the constitutional charge of President Osmena. In Osmena’s simple words of acknowledgment, the Commonwealth of the Philippines was re-established on Philippine soil.”

Romulo, who was also a great statesman and an award-winning journalist, continued:

“This is the story I have come back from the Philippines to tell you. It is of General MacArthur and the idea he has lived and fought for since he left Bataan…It is the story of that great Filipino underground army that fought in heart-breaking secrecy for two and a half years and their final triumph in sharing our victory at Leyte. And it is, moreover, each and all of these, American and Filipino feelings, different reasons and different earth, but all stirred by the same impulse that can be summed up in one word—Bataan.

“I saw Bataan again in Leyte. Filipinos and Americans there shared understanding of one another, having shared the same hunger for liberty, the same sacrifices and death and glories, and the same God. From this American Congress we obtained political equality. This is why it is impossible to encompass in communiques the way the American G.I. feels toward the Filipino who fought alongside his fellow American in the same fox hole in Bataan and later inside the barricade as his ally and friend; impossible to compress in print the way the Filipino feels towards G.I Joe.,.his comrade in arms and liberator. This is democracy as we saw it on Bataan. It is on Leyte, set like a torch between East and West.”

Nearly 70 years later, the same passion that liberated the Philippines must once again be summoned by the U.S. and the world, to respond to this natural disaster and save the country.

The start of financial and military aid, including a U.S.Osprey helicopter, have already begun to trickle into Tacloban over the weekend.

And amid the tragedy and rubble, there was even news of a brand new baby born to Emily Sagalis, 21.

She named the little girl Bea Joy, in honor of Emily’s mother Beatriz, swept away by Yolanda.

Even what little hope exists comes shadowed by tragedy.

The reports of just 3 dead on Friday night were wistful.

There are now reports of at least 138 , with Philippines officials saying they  expecting that number to climb into “the hundreds.”

Looking for your loved ones who are in areas devastated by Supertyphoon “Yolanda”?

“If you are looking for a family or friend, contact our Social Services Restoring Family Links and Tracing Services, please call 09175328500,” the PNRC said.

It also has a mobile phone version.

Manila may have been spared, but the devestation appears to be great around the central part of the Philippines, particularly Leyte and Samar.

Leyte was the WWII  battle we celebrated last month, the one that  liberated the Philippines. If it survived WWII, It will  survive the typhoon. But it will take time and help from around the world.

When the typhoon was first reported on Thursday, friends of mine asked me if I had relatives in the Philippines.

I told them as a Filipino American, I’m related to everyone there.