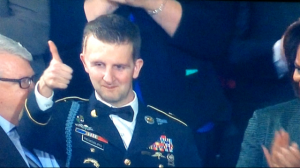 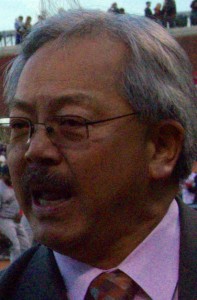 Some observers might think San Francisco must be on President Obama’s “Do Not Call” list after that embarrassing incident during his last visit. That’s when one of the handpicked invitees who stood behind Obama spoke out and disrupted the president’s speech.  ( http://aaldef.org/blog/yelling-stop-deportations-an-undocumented-asian-american-stands-up-and-obama-stands-down.html ).

But Obama is merely showing how you can’t let a little thing like that spoil your good attitude. We’re not talking Chris Christie here.

Obama is moving on, because Ed Lee can help him.

So instead of a “shunning,” the president is shining a light on the San Francisco mayor.

Lee fills a number of purposes for President Obama at the #SOTU.  If anyone asks,”Is there an Asian American in the house? ” Well, now there will be.  (They won’t be in the bomb shelter). As Michelle’s guest, Lee is the son of Chinese immigrants, the first Asian American mayor of San Francisco in the nation’s most Asian American state.

But Lee’s real purpose may be to be the bureaucratic face and prime working example of an elevated minimum wage. SeaTac in Washington has a $15 minimum. But SeaTac is not San Francisco, and Obama needs to show a major city example. That’s SF, with the next highest minimum wage at $10.55 an hour.

At a time when inequality has become Obama’s “here-and-now”  issue, having Lee there is critical to show everyone that $10.10 is do-able. SeaTac is struggling with $15. But new studies show SF’s businesses haven’t been hurt by years of an elevated minimum wage, well above $7. In fact, even conservatives like Bill O’Reilly are coming around to embrace the issue of raising the MW.

Shack up with another minimum wage earner, don’t have kids, and live in your parent’s trailer, and you can survive on $30,000 a year combined. Sure, why not. (You want to eat too? And have clothes? Wow, no one told O’Reilly that).

No, of course it’s do-able.

You won’t be among the One-percent though.

Maybe this is Obama’s way to discourage future immigration to the U.S.?  Land of opportunity?

No, America is the “new”  land of inequality.

Preview excerpts from President Obama’s SOTU  address– (Second to last graph (bolded) is perhaps the most direct in terms of president’s intention to by-pass Congress if he needs to get things done).
“In the coming months, let’s see where else we can make progress together.  Let’s make this a year of action.  That’s what most Americans want – for all of us in this chamber to focus on their lives, their hopes, their aspirations.  And what I believe unites the people of this nation, regardless of race or region or party, young or old, rich or poor, is the simple, profound belief in opportunity for all – the notion that if you work hard and take responsibility, you can get ahead.

Let’s face it: that belief has suffered some serious blows.  Over more than three decades, even before the Great Recession hit, massive shifts in technology and global competition had eliminated a lot of good, middle-class jobs, and weakened the economic foundations that families depend on.

Today, after four years of economic growth, corporate profits and stock prices have rarely been higher, and those at the top have never done better.  But average wages have barely budged.  Inequality has deepened.  Upward mobility has stalled.  The cold, hard fact is that even in the midst of recovery, too many Americans are working more than ever just to get by – let alone get ahead.  And too many still aren’t working at all.

Our job is to reverse these tides.  It won’t happen right away, and we won’t agree on everything.  But what I offer tonight is a set of concrete, practical proposals to speed up growth, strengthen the middle class, and build new ladders of opportunity into the middle class.  Some require Congressional action, and I’m eager to work with all of you.  But America does not stand still – and neither will I.  So wherever and whenever I can take steps without legislation to expand opportunity for more American families, that’s what I’m going to do.”

“Opportunity is who we are.  And the defining project of our generation is to restore that promise.”

Check out my comments on the President’s SOTU address on the Asian American Legal Defense and Education blog: